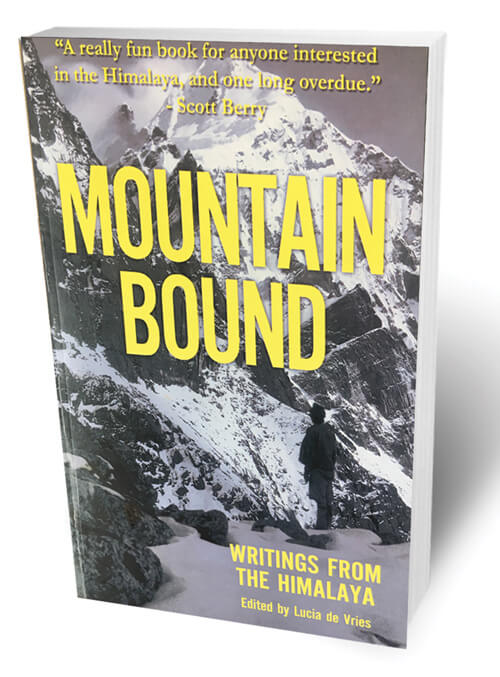 Mountain Bound – Writings from the Himalaya

“A really fun book for anyone interested in the Himalaya and one long overdue.” – Scott Berry

Through its combination of stunning beauty, extreme climate and unique cultural and religious traditions no other part of the world appeals to the adventurous and spiritual heart as much as the Himalaya.

For those overwhelmed by the available literature on the mountaineering, culture and history of the Himalaya (or don’t have the budget to buy all the books) Mountain Bound is a useful primer. You get a glimpse of the adventures of people like William Kirkpatrick, George Mallory, Peter Matthiessen, Edmund Hillary, George Schaller, or Christopoh von Fürer-Haimendorf, so that you can always go and buy their books if you liked what you read. There is a useful glossary of the source books at the end. – Nepali Times

From the memories of the British Raj, to contemporary accounts inspired by a stay in the mighty mountains, a large body of literature has been produced by those visitors who adopted the Himalaya as their (temporary) home. These accounts would steal the hearts of those who longed for new discoveries or for a mystical, harmonious place, far removed from the industrialized world.

This book presents the 19th and 20th century’s most inspiring Himalayan visitors and their accounts.

These captivating stories from ‘the abode of snow’ provide an intimate insight into the hardships and delights faced by those who fell under the spell of the Himalaya.

Order your Ebook here or your hardcopy here!

Want to get a taste first? Read the introduction here.

Lucia de Vries (1964) is a Dutch journalist who has lived in Nepal since 1992. Fascinated with the image of Nataraj, Lord of the Dance, as a child, she first travelled to South Asia in 1988, and kept coming back to travel, write and meditate, until she finally moved to Nepal in the early 90s. Here she co-founded Face to Face and Haka Haki magazines, and together with friends established a publishing house for children’s books. Apart from reporting for Dutch newspapers and providing communication support, she helped establish animal welfare in Nepal.

De Vries is the (co)author of a number of books, including Nepal, ZoutZoet, and Magic Days.