War is the crime 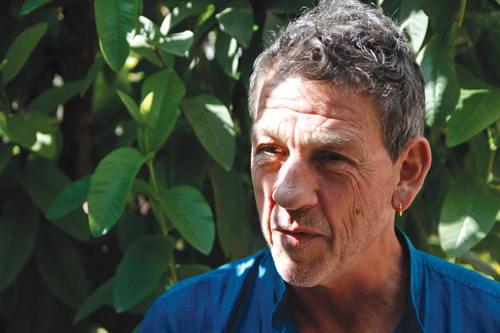 Where to go after the war is over? Many photographers and reporters are confronted with this question after documenting violent conflicts. For Sri Lanka-based British photographer Stephen Champion (above) the answer was obvious: to nature. Or more precisely, to the war being waged on nature in the island.

Stephen Champion was only 25 when he witnessed a man being torn to pieces by a bomb. He did not do what was expected of him: focus his camera and shoot. He crouched down and wept.

Since that first death in 1986, the photographer has spent 23 years documenting the two wars that raged simultaneously in Sri Lanka. Apart from the Tamil separatist conflict which ended with the defeat of the Tamil Tigers in 2008, he covered the Marxist JVP insurgency, crushed by government forces by 1992. Together, the wars killed over 150,000 while more than a million got displaced.

Stephen Champion’s war images were on display at the Photo Kathmandu exhibition Measures of Loss and Memories of War at Patan Museum. It was a selection from Champion’s War Stories, published in 2008. 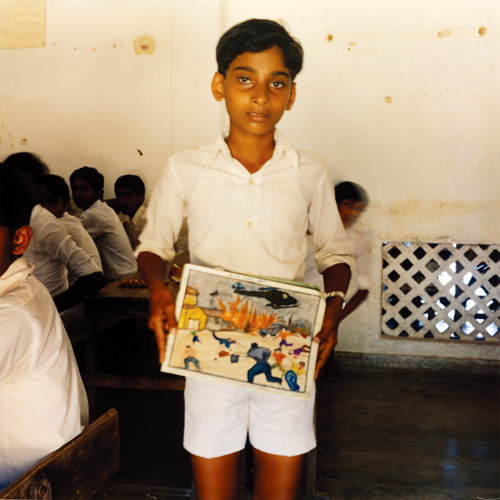 Displayed among the tall trees in the park behind the Patan Museum, they showed the terrifying impact of war on civilians. A Jaffna schoolboy showing his drawing of a bombardment by a military helicopter (left), with fire and dead bodies, and scared looking civilians; a young man grieving at the side of a body; amputees and internally displaced; blood seeping from a gate; messages warning people to vote; messages warning people not to vote.

The accompanying text by Champion reads: ‘War is brutal at best. It is not meant to be anything else…While we continue to create systems of war, we are all very much responsible for the residual events. There is no such thing as a war crime. War is the crime.’

Among the ‘residual events’ of war, observes Champion, are violence within families, the rape of women, and the war on nature. The move from documenting the war between humans to the war on nature was a natural one, says Champion, “There is a strong connection between warfare and environmental pollution. The first chemical pesticides were developed to act as war agents. As in war, environmental destruction helps some guys make a lot of money. And in both cases it’s the common man who suffers most.” 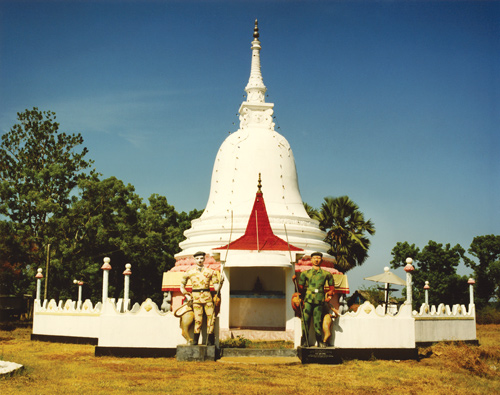 Sri Lanka has become a dumping ground not only for pesticides but also second rate medicines and e-waste, reminds Champion. The country annually loses 1.4 per cent of its forest cover. Champion’s adopted home is believed to be the world’s fifth largest polluter of ocean plastics. The impacts are disastrous, not only for the island’s biodiversity, thousands of Sri Lankans are dying from kidney failure caused by exposure to pesticides.

Champion’s ‘Colours of Change’ series reveal this transformation in detail. Bulldozers eating into the nation’s forest hills, elephants foraging on plastics, cement fighters integrated into a Buddhist pagoda, the demolishing of historical houses, the arrival of kitsch tourism and entertainment venues. Interestingly, the images are taken with the same 1959 Rolleicord box camera Champion was gifted by his grandfather when he was 19 years old. Once a year the negatives are developed back in the UK and the prints scanned for use in publications.

Champion is not without hope. “My hope is that we start creating the dream that was dreamed by the idealists before the war started. It all begins with an understanding of our interconnectedness. We should know that by now: our mixed blood lines and DNAs prove it. We are all connected. We all depend on the same life forces and on each other. Understanding that gives us the freedom to be who we really are, and to allow others to do the same.”

No war, no peace in Sri Lanka, Kunda Dixit

A keeper of history, Smriti Basnet