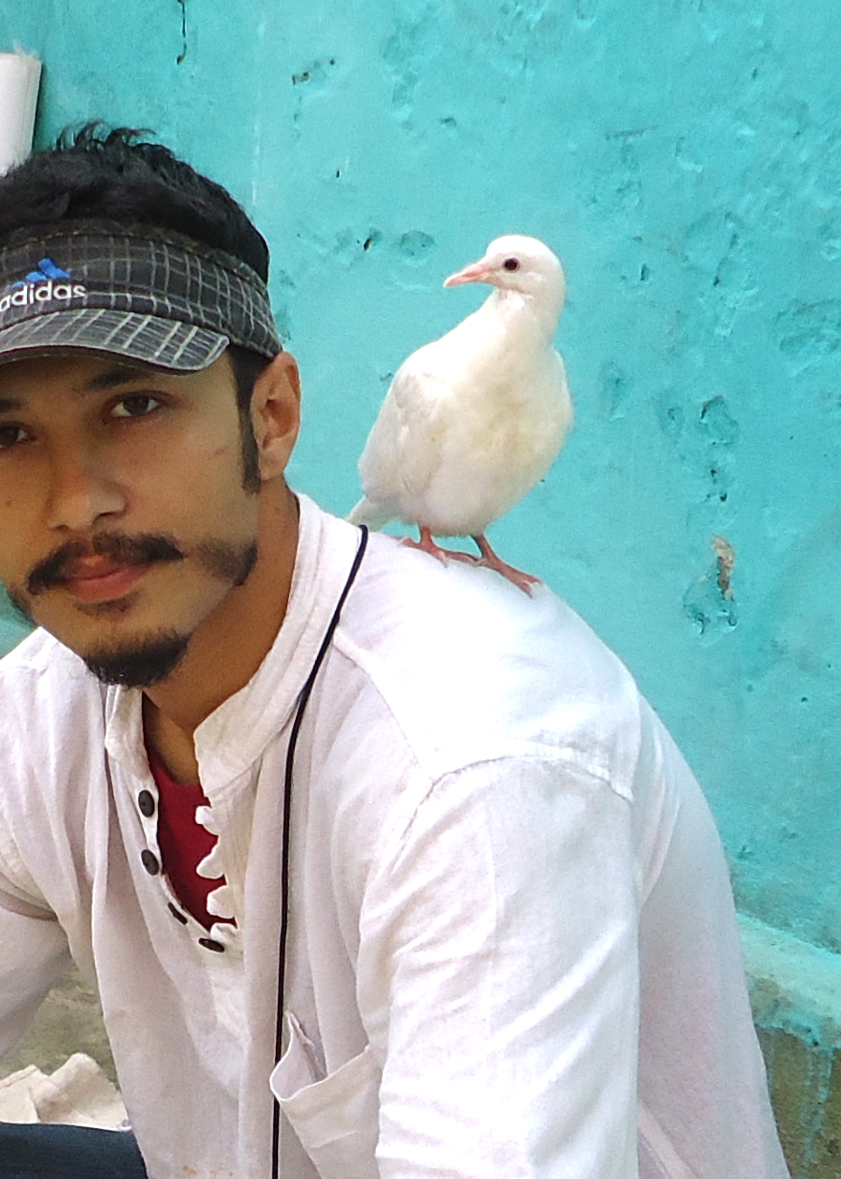 Among the many disturbing images of the animal sacrifices at the Gadhimai festival that took place in November 2014, there was one that stood out. It is that of a young man standing in a large field littered with buffalo heads and corpses, holding up a banner. The banner says ‘Windows of Choice’ and shows pictures of animals, both loved and abused. On the man’s shoulder sits a young, white pigeon, perched firmly, as if holding on for its life.

The image was uploaded on Facebook and went viral. Campaigners drew strength from the lone crusader and the surviving white bird. The unknown campaigner became known as ‘The bird man of Gadhimai’.

The image reminded many of other iconic images showing the power of a single person, like that of the Chinese man positioning himself in front of a row of tanks at Tiananmen Square, Rosa Parks in the ‘wrong’ seat on the Montgomery bus, or an injured Malala Yousafzai in Afghanistan. 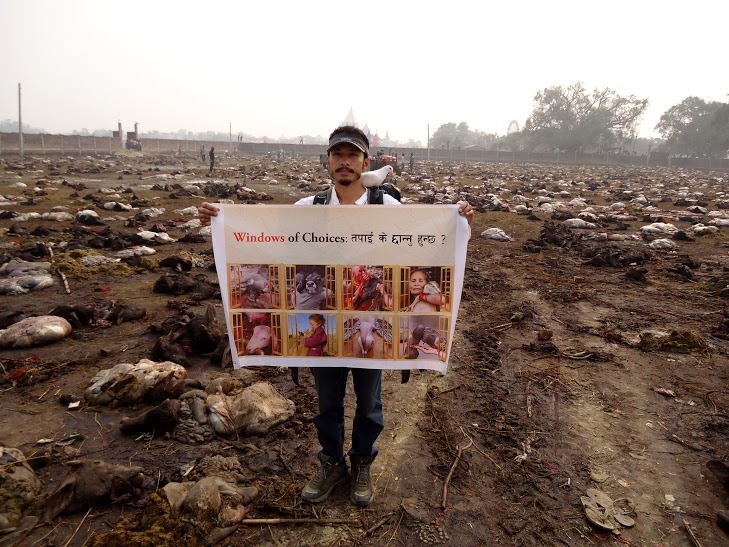 Who is the young man in the photograph, and what is the story behind the pigeon?

The ‘bird man’ is Raghu Aditya. He is a language editor and lives in Imadol. We meet Raghu at his favourite location: Patan Durbar Square. In a cafe we sit for coffee and yomari. The daughter of the owner soon becomes friends with the white pigeon and starts feeding it. She can’t get enough of the bird and eventually, her mother shoos her away.

Raghu was not born an animal lover. “As a young child, I loved to squash ants, thinking they were little robots that needed to be eliminated. It was my father who made me realize what I was doing. He took me aside and explained that animals feel pain, like humans do.”

Raghu became a vegetarian at the age of eight. “I now believe compassion starts with a small thing, like an ant. Then it stretches, and reaches out to ducks, goats, buffaloes, and ultimately to humans.”

Growing up in Kathmandu, Raghu discovered butcher shops, with goats tied up, waiting for their turn. “People who knew me as a child now tell me that during one festival I threw myself between the butcher and the goat just at the moment when it was to be hacked. Neighbours removed me, and sent me back home.”

Raghu started focusing on the local stray dogs, and build small shelters for them, using local materials. “I used to be ridiculed a lot but it turned out that my small acts acted as seeds. Many of my childhood friends decided to become vegetarians later on.” 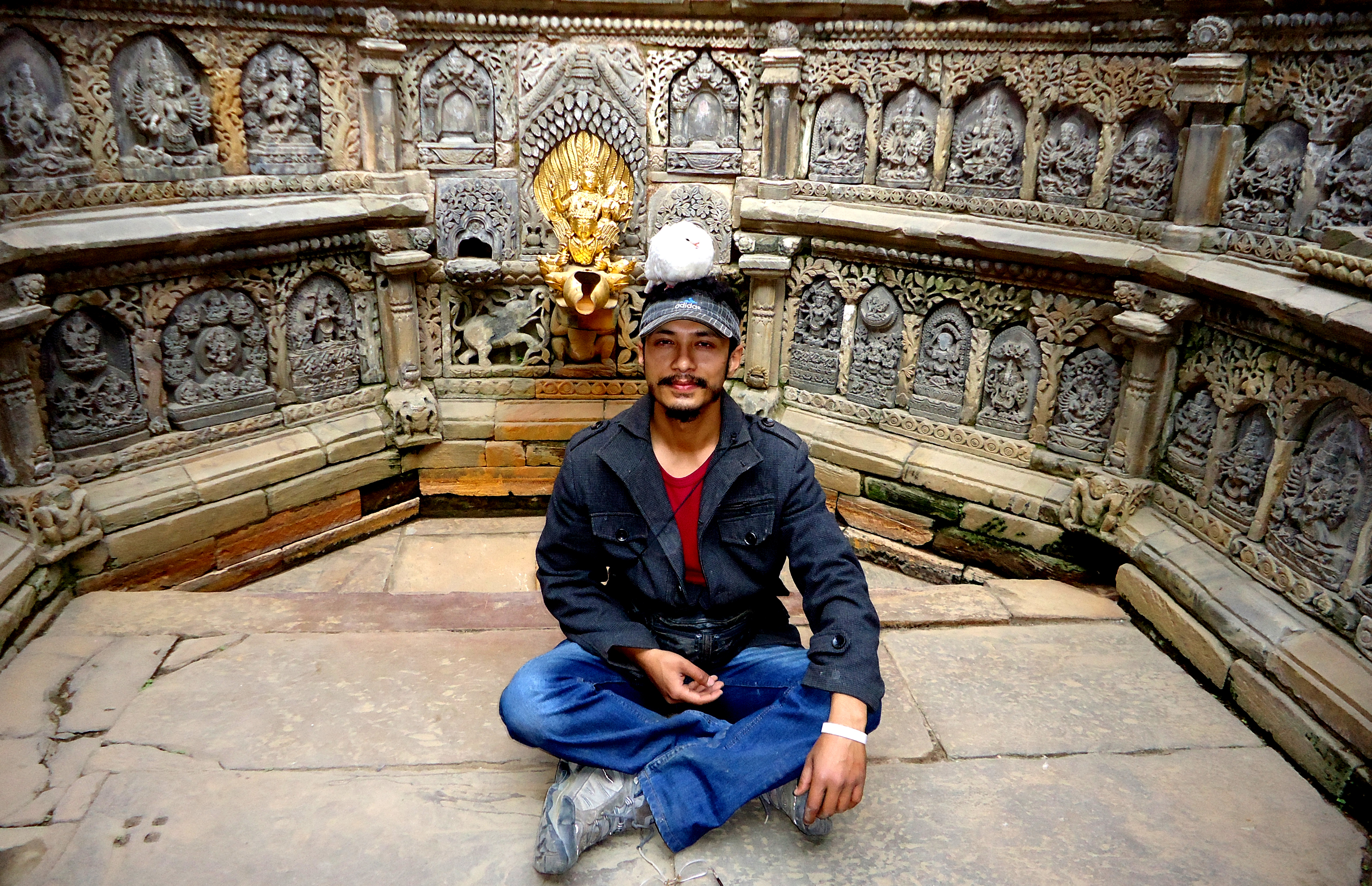 Increasingly aware of the plight of stray animals, Raghu went from school to school with PowerPoint presentations to promote humane treatment of animals. Nowadays he organizes ‘mini’-musical events, selling animal greeting cards and promoting animal welfare messages. The small profits are spent in helping the local strays. With the help of children Raghu builds small shelters for strays to keep them safe and warm, using local materials.

“I believe in small things. When things are small, it is easy for me to fill them with fire, reason, and purity of intentions. I have observed that people, especially children, who are near such a fire, are quick to catch its spark and some soon get ignited themselves.”

By now the little girl is back in the cafe, feeding and stroking the bird.

When the Gadhimai festival drew close, Raghu decided that instead of speaking out against the sacrifices from the comfort of his home, he would go to the venue. Someone offered him a place to stay, some six kilometers from the temple area. Raghu arrived on November 27, carrying three banners.

“The first day was intense. I reached the venue late in the afternoon. I had not anticipated such aggression. People lashed out on me immediately after I rolled out my banner in the crowd.  One of the banners got stolen and I was forced to withdraw. I watched helplessly as animals poured in. Many of them were terribly dehydrated and malnourished. Some collapsed from exhaustion upon arrival and people still kept beating them to make them go on. At times, I placed myself in-between the hands doing the beating and the buffaloes. But that was just a desperate act.”

Raghu left feeling helpless, and at night tried to think of a prayer for the animals waiting to be killed. “I am not religious but someone asked me to do this, and it actually helped me to calm down. I came up with a short one: ‘May you die without pain; may you be free’.” Raghu also mentally reached out to the butchers patrolling the enclosure with swords: “Please do not get drunk before you do your job tomorrow. I want you to be sane and finish these poor creatures off in one blow.”

Raghu: “On the second day, on my way to the killing enclosure, I observed many bad sacrifice attempts. The animals were rarely killed in a single blow. Some kept hacking five or six times before the animals were finally out of misery. The same people were assigned to kill the buffaloes!”

The campaigner positioned himself in front of the main entrance to the slaughter enclosure and rolled out his banner. Now people began to show an interest. One aggressive man stepped in: “This man is a Pahari, and he is interfering with our Madeshi culture. He has no right to be here, telling us what not to do.” The crowd seemed to agree. “After we get done with the buffaloes, the Dalits will take away their bodies. Unfortunately, my friend, there will be no one to take care of your body,” the man threatened. Another person ripped apart Raghu’s banner.

Raghu got disheartened and decided to take a break.  Near the buffalo enclosure he noticed people keeping headless birds in small cages. He learned that although people set pigeons free at the main temple, they sacrifice them in thousands around the enclosure and in nearby villages. Raghu asked what a few what they planned to do with the bodies. ‘Eat them, of course,” they said, “this is prasad.”

Raghu noticed a couple of boys carrying live pigeons. “Would u mind selling them to me?” he asked.  “No way,” the boys said, “We cannot. It’s against our tradition.”

Raghu then noticed a young, white bird on the roof of a small temple. A boy had his eyes fixed on it. As soon as the bird moved, he caught it by its tail. Raghu decided to give it one more try.

“Why should I sell the bird? It is for the sacrifice,” the boy replied.

“I’ll give you money for it!” Raghu argued.

“No way! Let me go. My brother is waiting nearby.”

“How much you want?” Raghu pushed.

That was how Raghu started sharing his life with a young, white pigeon, otherwise destined to be killed at the world’s largest animal sacrifice. Raghu: “As soon as I took hold of the bird, I tried to make her fly. She wouldn’t. She probably was not old enough. I then placed her on my shoulder. The bird seemed to like it there. She made me feel very special. I drew great strength from my new companion.”

Raghu decided to join the crowd once more, this time with the white bird on his shoulder. Threats were still being issued but a few in the crowd started showing support. A foreign activist stood by him for some time. Then a young student pulled Raghu away from the crowd. “Let’s continue the protest nearby the police,” he suggested. The student was joined by five others. They held up the banner when Raghu got tired and discussed animal sacrifice with the devotees.

After the killing of thousands of buffaloes inside the enclosure was completed, Raghu felt numb. “I have never seen so much bloodshed in my life. I was relieved it was over.”

After the night’s rest, Raghu returned to the fields with his bird. “The scene will be etched in my mind forever,” he says. “There were remains of the dead animals, blood and feces everywhere. The stench was overwhelming. Some people were vomiting. And that was supposed to be the prasad! Even then devotees were still shouting ‘Jai Gadimai’”

When Raghu took out his banner in the field of buffalo corpses, he was surprised to find around twenty other people joining him. ‘I realised I had fulfilled my mission. I wanted to reach out to those who care, and I found them. As long as a small group of people care, and speak up, there is hope. Change always starts that way.”

Since his protest, Raghu has become an inspiration for many. Overseas supporters offer to send money, which he decided to redirect to established welfare organisations in Nepal. The bird is now called Sanu Maya, and the two are inseparable. Raghu tried to free her, but till now the bird shows little interest in spending time elsewhere.

By now the girl is back. She feeds some yomari dough to the bird.

Not everyone is charmed by Raghu and his crusade. “I received comments about being cold since I was able to witness all these killings, and for not reacting with more emotion. Many think that one has to be upset or angry to be genuinely concerned about something. However, relying solely on emotions eventually hampers our effectiveness. With all the horrors that happen every day, helping animals can be like putting one’s hands into fire. How long can you keep your hands in such fire? It is unproductive to be led by emotion alone. Developing equanimity is important to not feel overwhelmed and to keep going.”

Raghu calls himself an agnostic but has been relying on meditation to improve his inner balance. “I find that I am less restless and can see things a little more clearly. I can cope with changes and losses better. Inner healing is a must when you want to help others.”

Raghu, like other campaigners, is also being criticized for focusing on Gadhimai, and not the issue of slaughterhouses in the West. “People always find arguments to shut you up, like the Madeshi versus Pahadi one. We are a part of the worldwide movement for justice, be it for blacks, women, or animals. Each one of us needs to own up all the world’s injustices yet be ready to start where we are right now.”

The girl is still stroking the bird. Other guests offer food crumbles. Sano Maya has become the guest of honour, it seems.

On the way back home from Gadhimai, Raghu found himself behind a truck with buffaloes destined to be killed in Kathmandu. They were stacked together and tied from their noses and tails. “I had seen so many animals suffer and being killed, I thought I was numbed. But the whole journey I felt for those poor buffaloes. At one point the truck veered over, and a tail broke off. Just like that. Of all the animal suffering I witnessed during that week, that incident is etched most strongly in my mind. The poor buffalo on its way to Kathmandu, with its tail snapped off.”