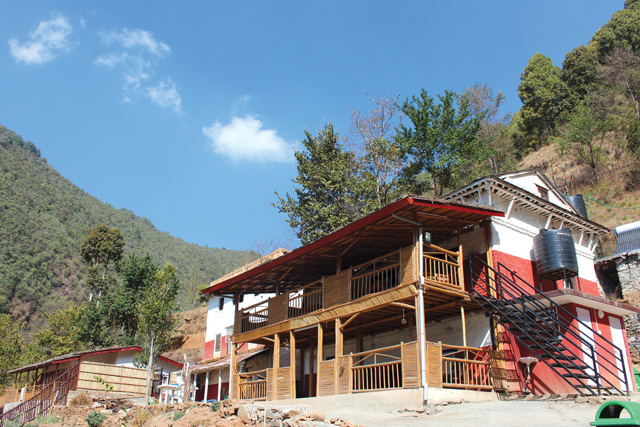 A remarkable chain of events shook up the lives of three friends after the earthquake, landing them in a village southwest of Kathmandu. After settling in Dollu, they never looked back. “It may sound strange, but the earthquake brought us so much good,” they say. 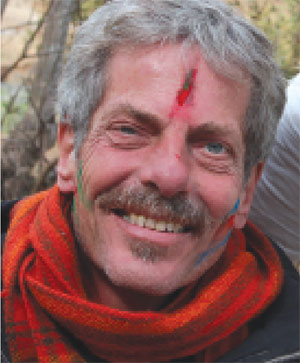 On 25 April 2015, Danish expat Christian ‘Simon’ Simmelkiaer (pic, right) was frying an omelette when he heard a rumbling. Seconds later he found himself outside the house, unsure what to hold on to. Chirayu Lohani and Swikiriti Acharya (pic, right) had just arrived outside the gate, equally upset.

When they met a few hours later, Simon suggested they take a tent and some sleeping bags and camp out in Dollu, a forested valley near Pharping, one of their favourite hiking destinations.

That night the friends slept on a patch of land behind a small restaurant, under the watchful eyes of Padmasambhava, the Guru Rinpoche, whose new, 40m statue dominates the settlement. While aftershocks brought further terror to the village, the friends felt strangely at ease.

“It was as if the place wanted us,” says Chirayu, a website developer. He and his wife Swikriti, an architect, had for some time been talking about buying land in a village to escape the city.

A few days later a Nepali farmhouse was offered to them. They bought it, and moved in. Says Chirayu: “The earthquake landed us here. I now believe if there is a dream inside you it will manifest.”

Simon’s connection with Nepal dates from 1978, when he arrived in Freak Street after travelling overland from India, and checked into the Lagan Lodge. He returned to Nepal in 2008, as the manager of the UN Volunteer program. When his contract ended in 2013 he stayed on to support a Danish IT company. The 2015 earthquake made him reconsider his life once again.

“Ever since I travelled as a backpacker to Nepal and India in the late ‘70s I dreamed of running my own place,” says Simon. It took the anthropologist 35 years to realise his dream: establishing the Solid Rock Restaurant and Lodge (pic, extreme right) in Dollu. It has six cottages and a restaurant that uses bamboo as an earthquake resistant feature.

Dollu is now known as ‘Little Tibet’ because of its eight grand Tibetan gumbas, home to 5,000 monks. The resort is located at the valley’s edge, and looks out across green hills, farmers’ fields and traditional village homes. 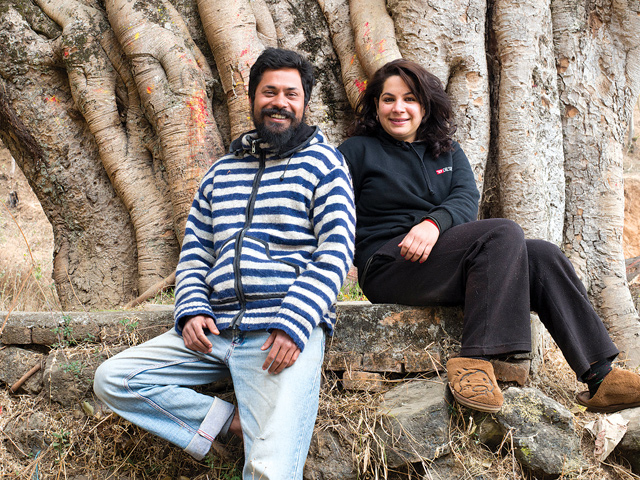 “It’s that end of the valley feeling that attracted me to this place,” says Simon. “There is nothing behind us, just rocks and mountains, which creates a solid impression.”

Another attraction is the village’s spiritual significance. In the eight century, Padmasambhava, the founder of the Nyingma lineage of Tibetan Buddhism, used the local caves to meditate with his Nepali consort Shakya Devi. After reaching enlightenment he is said to have conquered the man-devouring goddess Dakshinkali and built her a temple, before moving to Tibet.

A famous pilgrimage destination for Tibetan Buddhists, for whom the place is as sacred as Bodhgaya, the area is now on the tourist map with the Padmasambhava statue. Hikes across the hills connect Dollu to Pharping and Champa Devi. Rock climbing is being promoted and it is already known as a paradise for bird watchers.

Simon recently married Meena KC, a student and social worker who supervises the development of an organic vegetable garden at the resort. Although Chirayu and Swikriti regularly return to the city to spend time with their families, they feel rooted in Dollu.

Swikriti continues to work as an architect and says she experiences more clarity in her work: “Living in Dollu has taught me a stability I did not even know I was missing.”

Moving out of darkness together, Sanduk Ruit