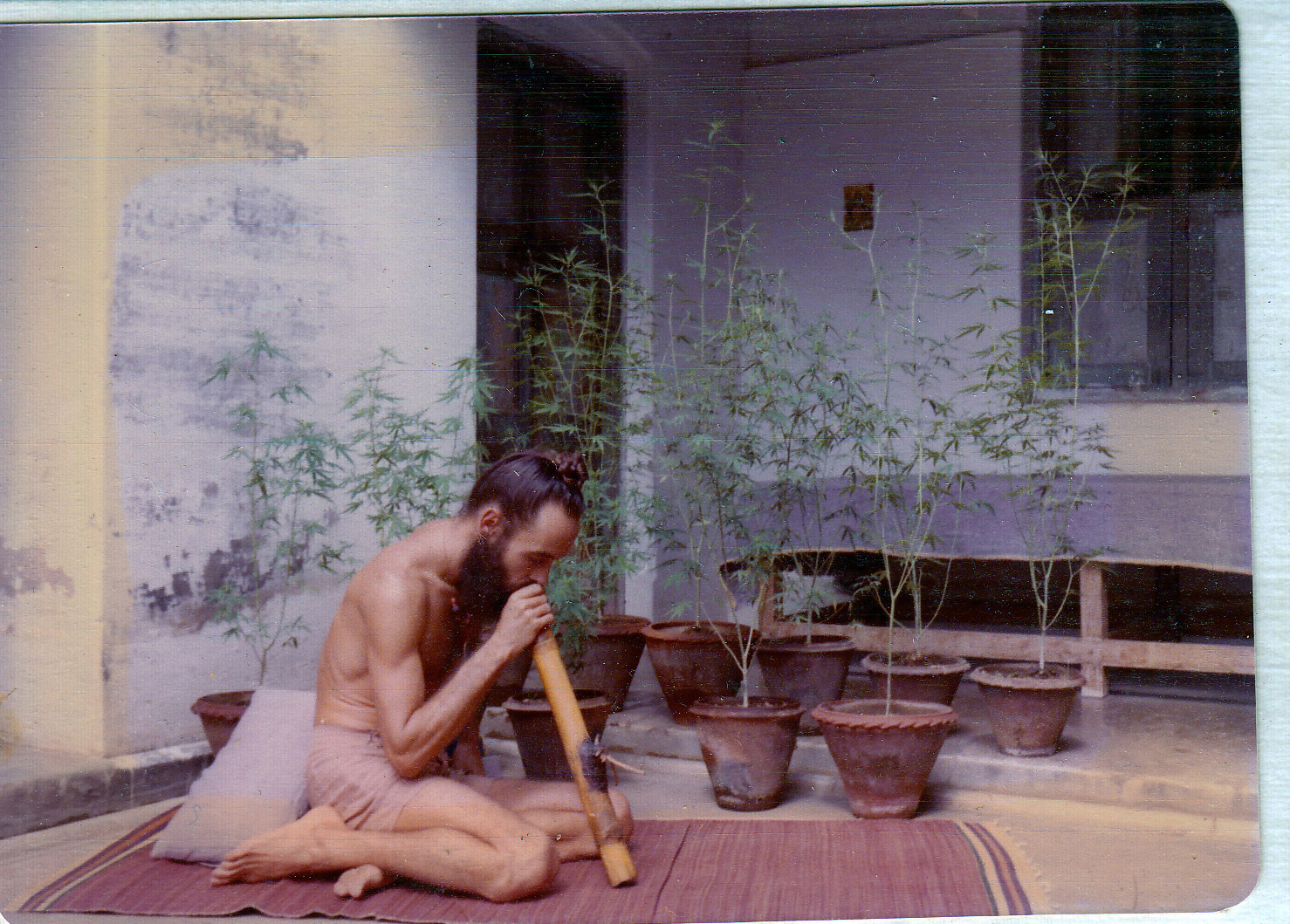 Freak Street is an integral part of Nepal’s modern history, and indeed of a global youth culture of the late 1960s, yet the hippie period is yet to be formally documented – especially in pictures.

The ‘flower children’ were essentially refugees from a materialistic and militarist culture and represented a unique youth movement that transcended physical and mental boundaries. It coincided with an eruption of anti-establishment protests across Europe and the United States.

In Nepal it was the precursor of the country’s tourism industry, and is worthy of  preservation even for historical reasons. But there are not many western Bohemians left among those who stayed behind in Kathmandu.Their Nepali counterparts are getting on in age too.

I went to meet the gifted artist, Jimmy Thapa, who used to run a dope outlet on Freak Street called Jimmy’s Wagon. “Meet Billy,” Jimmy told me, “he’ll tell you all.” 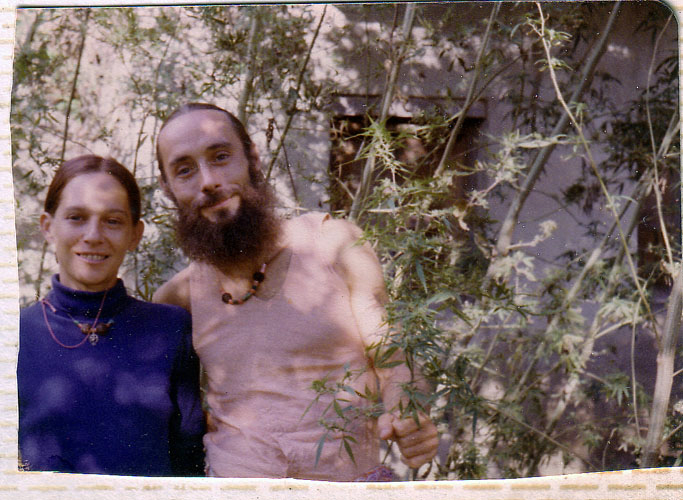 William and Susan in a marijuana patch “We got marijuana seeds from a friend and for a while we grew weed. But then the landlord requested us to stop. Not because he didn’t like it but because there is this law in Nepal that says if you grow crops on a piece of land for more than two years you can claim it.”.

Billy is William Forbes, better known as ‘Swayambhu Billy’  and his wife Susan Burns. They have lived at the base of Swayambhu Hill on and off since the early 1970s. Their present house in Kimdol is guarded by a larger than life Chow Chow, the walls are festooned with artwork by renowned ‘real’ hippies and beatniks they befriended in Kathmandu: Ira Cohen, Petra Vogt and Hetty McGee

“We were riding rickety buses, touching some holy stone. I felt definitely at home. It seemed this was it for me.”

Forbes and Burns were both born in 1943 to Communist parents with no interest in spirituality. But while growing up in New York, Forbes met people who had returned from India with tales of inner discovery.  He booked a flight to Europe and travelled overland to India. It was 1970 and he “fell into a groove”. 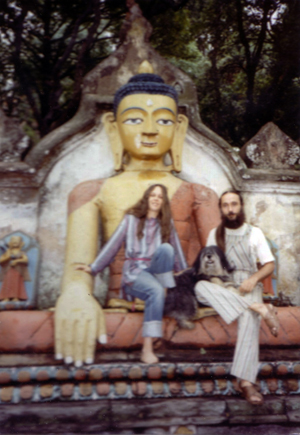 William and Susan with the Swayambhu Buddha William: “For karmic reasons we felt attracted to a power place like Swayambhu.”

Burns followed him two years later, and remembers: “We were riding rickety buses, touching some holy stone. I felt definitely at home. It seemed this was it for me.”

Their photographs of the late 1960s and early 1970s show a largely empty city with few cars and few people. Majestic bulls had the right of way. Life seemed to flow according to astrologers’ calendars from one festival to the next. Swayambhunath was untouched, and Boudhanath was just a cluster of houses in the middle paddy fields.

Into this largely pristine valley with the Himalaya beckoning to the north and Goa to the south, travelers from all over world converged, smoked, danced and ruminated about Rumi. It was the first time a generation of youth could simply drop out and be who they wanted to be, without the pressures of parents and society.

“It was a chaotic but also highly creative scene,” remembers Forbes. “Everyone was on their own trip.” 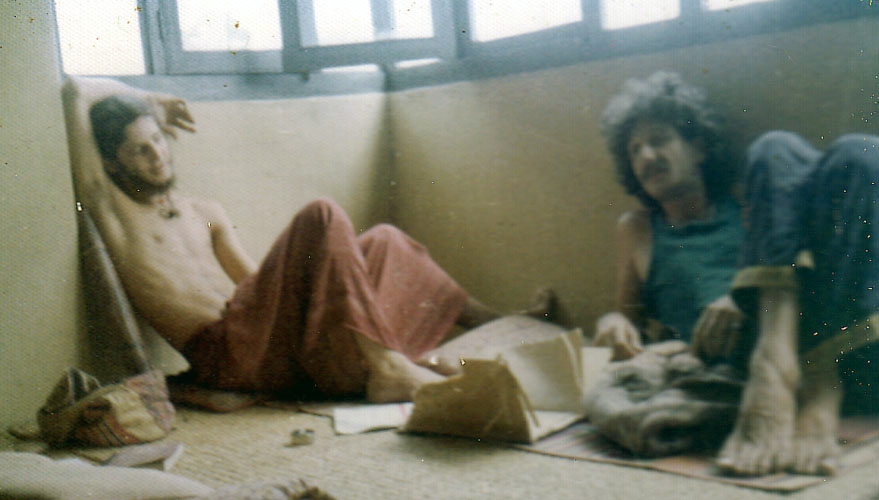 Smoking with a friend in Swayambhu William: “Here is me sharing a chillum with a friend in our room above a garage. Hanging out and smoke was part of the lifestyle then. Nothing was regulated. We listened to Patti Smith, has a smoke, and moved to the next house to do the same thing.”

Besides Freak Street there were Swayambhunath and Boudhanath — two outposts representing distinct groups of hippie expats. Boudhanath specialised in Tibetan Buddhism, antiques and carpet businesses. It had Shiva’s Slaves, riding classic bikes such as BSA, Triumph and Royal Enfield. Swayambhunath was more of a trippie area, easier on the budget, suitable for those who preferred tea over beer and chillums over other drugs.

But hippies from both places inevitably ended up on Freak Street. By the mid-70s, this narrow side street was the hot spot to get the latest tapes and books. Restaurants with funky names like Don’t Pass Me By, The Hungry Eye, and Lost Horizon, had good stereo sets and the latest Beatles and Santana songs seeped out of the open windows to the street below.

“One day we took this bus to Tatopani and stayed there for a few days. We made good use of the hot bath, stepped on Tibetan soil and smoked chillums.”

Few places matched Trilochan Shrestha’s Ying Yang restaurant on the square opposite Hanuman Dhoka Palace. Here one could dance any time of the day because the place never really seemed to close. “Trilochan had all of us trapped in there,” Burns recalls. 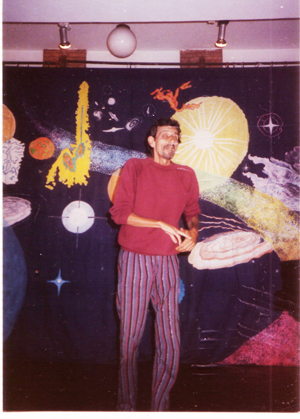 Eight Finger Eddy at the Vajra “Eddy was a jazz musician, playing the base guitar with his eight fingers. He was called the ‘guru’ of the hippies. He started Goa as a hippie destination.Whenever he was in town, Eight Finger Eddy made some extra money by having a show at the Vajra. He used talk about his observations in Nepal and India. He was very funny. The backdrop was made by hippie artist Jimmy Thapa, who was then focusing on astrological signs.”

There were also cremations, after someone OD-ed and died. “It was a world in which death was always a possibility,” Burns says. But mostly it was tea and a smoke and someone always strumming a guitar in the background.

Quality photos of this era are rare. Cameras got stolen and others got swapped for hand-knotted carpets. But even those who had cameras snapped few personal pictures. “The whole scene was a kind of underground,” Forbes explained, “no one liked to have their pictures taken. There was this privacy thing. You thought of the people you left behind. They might not like seeing you stoned or doing crazy things.”

Not so freaky anymore on Freak Street, Alok Tumbahangphey