Born to be free

Instead of riding them to observe wildlife, elephants themselves are now tourist attractions
Lucia De Vries in CHITWAN 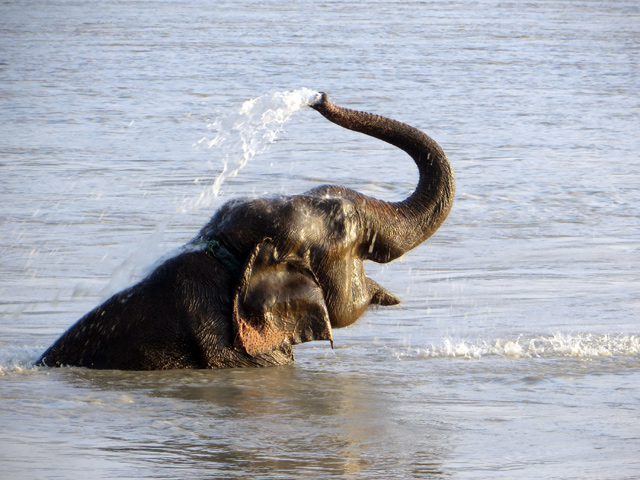 Saraswati Kali enjoys her daily bath in the river.

Raj Kali is 42, and walks surprisingly fast and light-footedly along a forest track in the Amaltari buffer zone of Chitwan National Park. Her trunk sways as if it has a life of its own: Sniffing out edible greens, snapping the branches of acacia, and slipping it into her mouth while on the move. Her friend, Dibya Kali is 46, and follows close behind. Visitors are guided by naturalist Shambhu Mahato on a jungle walk to observe the rhinos wallowing in a muddy pool by the river.

Earlier this year, Nepal’s oldest safari resort Tiger Tops discontinued its most popular activity: Elephant-back jungle safari, and unchained 12 captive elephants including Raj Kali and Dibya Kali. Tourists are no longer allowed to ride or touch them, taking selfies and feeding the elephants is prohibited. They are instead invited to observe the animals as they go about their daily lives. 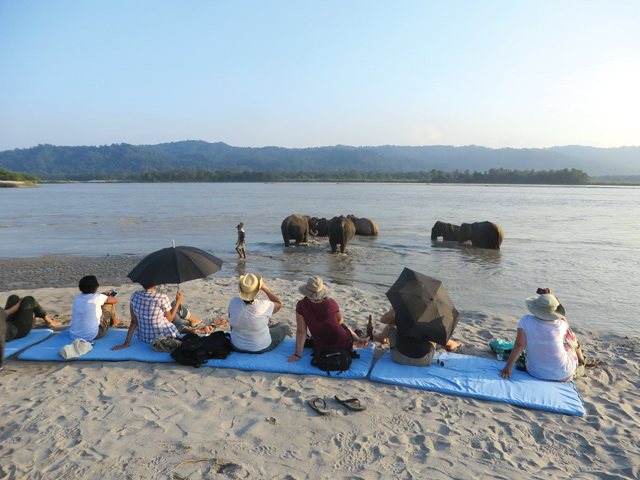 UNCHAINED: Instead of riding them, tourists conscious about animal rights prefer to watch them instead.

Customers at this internationally-known jungle resort in Chitwan do not miss going out on elephant backs, in fact they like this unique and intimate glimpse of the daily life of elephants, which gives them a different kind of respect and understanding of these majestic animals.

Unchaining the elephants was not an easy decision for Tiger Tops’ Kristjan Edwards. “I remember going on a picnic with friends in the jungle as a child, taking some of the elephants with us. They would be left grazing, there is no more powerful an experience than being with elephants who are allowed to be on their own,” Edwards says.

After being approached by a local animal welfare organisation with a proposal to stop elephant-back safaris, Edwards admits he was interested but not immediately convinced. It was after meeting Carol Buckley, founder of Elephant Aid International, that he saw the way forward.

Being a former mahout herself, Buckley understood elephants, and knew that they are very expensive to keep. Any change would have to be economically viable, and that is how the idea of letting visitors observe elephants at close range instead of riding them was born.

“Moving away from elephant safaris 50 years after we introduced them, seemed too big a step, but I had seen young elephants being trained at the breeding centre. It was horrifying, they are scarred for life,” Edwards recalls.

Buckley, who helped the Chitwan National Park unchain its working elephants, used solar-powered electric fencing to corral the elephants instead of chaining them. A camp featuring six tents and a dining hall overlooking the corrals, enables visitors to observe the elephants as they forage.

“It took time for the elephant drivers to warm up to the idea,” admits lodge manager D B Chaudhary, “they were worried about losing their job and about losing control of the elephants. But slowly the mahouts learned to trust the new approach.”

Not all mahouts are completely convinced, yet about leaving their stick and bullhook behind. Ratan Mahato wonders what he will do when his elephant Hira Kali gets frightened and starts running. But if the bond between a mahout and an elephant is strong the animal will respond to verbal or physical commands. Six months after the experiment began, the health of elephants has improved, they no longer have problems with their feet, lice and ticks have gone, and they don’t have digestive issues either. The elephants are now inseparable from the friends they are grouped with. 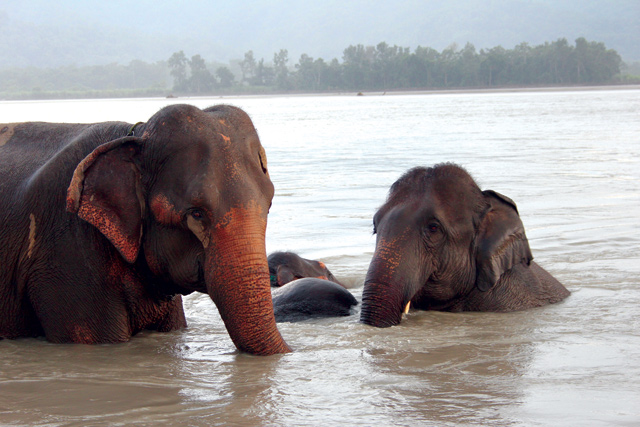 The sight of elephants bathing in the river during a monsoon downpour has a primordial feel.

For Edwards, the upcoming autumn tourist season will be a test to see if the experiment has worked. There are positive reviews already. International tour operators think elephant viewing rather than elephant safari will be a draw.“This is exactly what we have been waiting for,” says Prachanda Shivakotee from Explore Himalaya. “If we want to save Chitwan as a destination we have to be innovative, and offer experiences that are sustainable, culturally appropriate and do not harm animals.”

[youtube https://www.youtube.com/watch?v=SJ3mzUQM0GA]It is late afternoon when 10-year-old Sandra Kali wades into the Narayani river, only her trunk and hump are above the water. She nudges closer to her mother Hira Kali and friend Saraswati Kali, and soon the three are seen frolicking in water, tumbling and trumpeting with delight.

Says naturalist Shambhu Mahato: “When we stop bothering them, the elephants become like children. They are happy and playful, and if we are kind to them they trust and obey us.”