When my Hero Honda Splendor bike got stolen last year, I felt a deep sense of loss. The Honda had grown on me like no other bike had before. The bike (re-baptised as ‘Heroine Honda’) took me to remote destinations inside the Kathmandu Valley, opening my eyes once more to the beauty of this place we live in. 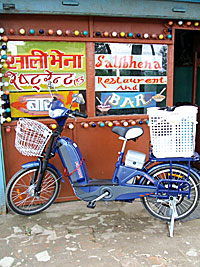 Buying a new Honda did not seem like a good idea. Valley bikes get stolen at the rate of 140 a day. Queuing for petrol for hours no longer appealed to me. So instead I decided to find an e-bike: the Foton TDP33ZWG, fresh from Zhucheng, China. It somehow reminded me of a centaur. The bike’s front looked feminine, with a cute white basket and a scooter-like dashboard. It had an extended back part, with a solid battery compartment and tool box under a comfortable seat, and a sturdy back seat. I did not even take a test drive. Just paid and drove off.

After the start up, there was no sound, not even a whisper. In the loud, mad afternoon traffic rush I rode home on a cloud. I was driving a great bike and at the same time was saving the world. There are no gears to worry about, no need for oil, no burned leg after touching the exhaust and less danger of your bike being stolen. E-bikes are not macho and thus, not likely to disappear. The bike can carry loads up to 75kg. My dog Putali is happy to share space in a large plastic basket tied to the backseat with a week’s worth of shopping supplies. Weight does not seem to affect the sturdy little thing.

Everyone looks at you and they want to talk. Ticket conductors call for the passengers to look at the kuire bike. Unknown people stop me to ask for the price (Rs 36-38,000), mileage (50km on four charged batteries), charging time (4-5 hours?with 15 hours loadshedding still no problem), pick up (Pulchowk okay, Chobar no-go), you name it.

E-bikes are classified as bicycles by the government so one doesn’t need a license or vehicle registration, and no helmet either. But they easily reach 30km/h. And since they are so quiet you need a loud horn.

Opponents argue that e-bikes are unsafe, increase congestion and indirectly pollute the environment through increased powerplant emissions and lead pollution from their heavy batteries.

Then, there are the four lead acid batteries that need to be replaced every five years or so. Each battery represents 30-40 per cent of its lead content emitted to the environment in the production processes, resulting in about 3kg of lead emitted per battery produced. In Nepal, batteries are scavenged for their lead electrodes which are taken to India for recycling. The acid goes into the rivers and groundwater.

Nepal could be a country in which petrol vehicles are banned and replaced by quiet, safe, green ones; where the government waives taxes and even subsidises green vehicles. Political leaders could, instead of driving polluting SUVs, opt for safa solar-powered cars and UN could replace all its monstrous SUVs. Women will enjoy better mobility and flexibility and won’t have to worry about slowly killing children with deadly carbon monoxide and greenhouse gases. Motorbikes emit 16 times more pollutants than cars.

Perhaps it’s time to invite macho role models to prepare Nepal for a new way of travel. Any candidates to promote the quest for non-polluting, quiet, safe driving in Nepal?

Is my dream unrealistic? If all the people who asked after my new bike over the past weeks actually go out and buy one, then the clean bike revolution has already begun.