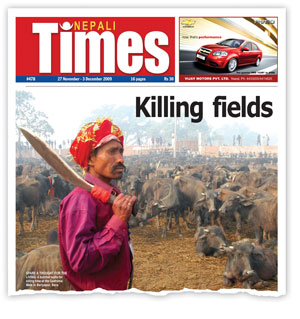 On 28 November the eyes of the world will once more turn to Nepal for all the wrong reasons. A temple enclosure in a small, obscure village in the Tarai will once more make headlines with gruesome images of the Gadhimai sacrifices.

Many already dread the visuals coming from Gadhimai this year. The 2009 festival left us with some of the world’s worst images of animal suffering — a knife-wielding young man grabbing the tail of a terrified buffalo, an emaciated buffalo calf, the last one standing it seems, looking at the camera with pleading eyes, another trying to find comfort at the side of its mothers’ decapitated body.

There are other images even more cruel that couldn’t be published. There is a series of photographs of a family torturing a piglet with a small knife, peeling its neck like an apple. What the participants do not realise is the impact the images have on the public at large.

When campaigners showed Tassia Kobylinska’s film on the festival at the Animals for Asia conference a few years ago, many participants left the hall and were seen weeping in the corridor. This was in sharp contrast to a scene from the film where a young woman near enclosure is saying: “This festival is so much fun.”

The first time I learnt about Gadhimai was in the early 1994 from a write up by Bara resident Jagdish Aarohi in Himal magazine who had visited the festival thinking it would be exciting. But the mass sacrifices left him stunned and nauseated.

“I never knew such cruelty existed in this world,” he recalled later. Aarohi’s writeup led to a campaign, first conducted in 1999 by the Society for the Prevention of Cruelty against Animals, Nepal, then by Animal Nepal, and later by Animal Welfare Network Nepal.

The movement became Nepal’s second animal rights campaign to be picked up by the international community (the Stop Monkey Business campaign created so much pressure that the export of rhesus macaques to US research labs was banned in 2009). Celebrities like Brigitte Bardot and Joanna Lumley have taken to the streets to lend their support, and the European Union has written to the Nepal authorities.

Supporters of the festival point to religious freedom, and note that international campaigners should instead focus on Bakr Id and America’s nationwide turkey killing at Thanksgiving. They have a point, but these issues are already being addressed by international campaigners. Turkey slaughter is regulated by law, and religious sacrifices, although exempt in many places, are increasingly being regulated. Denmark and Holland have banned religious sacrifices, and other European countries are debating on doing the same.

One important question for us in Nepal is to what extent should Gadhimai be regarded as a religious event, since people have to pay to watch the buffaloes being massacred, which means it resembles a spectacle, rather than a ritual. Much money is also made from paid recreational services and selling hides.

Indian animal rights activist Maneka Gandhi argues that all sacrifices are propelled by commercial interests, and propagated by feudal leaders to increase their own status and earnings. Villagers start borrowing money from money lenders to buy animals, indebtedness increases, as does dependency and social disharmony.

In economic terms, the sacrifice of tens of thousands of livestock does indeed mean a great loss to individual livelihoods. At a cost of Rs 10-20,000 per goat or buffalo, the sacrifice of 50,000 animals comes with a huge price tag in an impoverished region.

The campaign against the mass sacrifice at Gadhimai cannot be imported, it has to grow from within. This is true for any social movement, be it against human sacrifice in the past, rape, domestic violence or discrimination based on gender, caste and sexual orientation.

Judging from reactions on social media, more and more Nepalis seem repulsed by Gadhimai. The former royal family no longer sends animals to Bariyarpur. This year, the Indian authorities will stop devotees without a license, and campaigners are ready for a border vigil. Although the Nepal government will not financially support the festival this year, the authorities are yet to speak out against it.

Indian historian Nanditha Krishna once noted that it suits governments to let the common people “amuse” themselves with sacrifice so that they will not notice more important problems such as corruption and mis-governance.

Is Nepal ready to heed the countless pleas and prayers to stop this cruelty that tarnishes the country’s international reputation as a land of peace and non-violence? I, for one, pray it is.

If postings on Facebook and Twitter could be heard, the decibel level of #Gadhimai and #stopanimalsacrifice is reaching a crescendo. Online petitions, email letters to the Nepal government have become a deluge.

The non-descript border village of Bariyarpur in Bara district in the Tarai is suddenly in the international spotlight again. This is where tens of thousands of buffalos, goats, pigs, chickens and pigeons are sacrificed every five years during the month of Mangsir (mid-November to mid-December) to appease the Goddess Kali.

Those who have the temerity to defend the ritual are assaulted on cyberspace by activists. My tweet about western hypocrisy in condemning the mass sacrifices in Nepal while condoning the slaughter of animals in carnivorous Europe and the North America has earned me an avalanche of hate mail.

Full disclosure: I am a non-vegetarian but am against religious animal sacrifices. What troubles me is the vocabulary of the anti-Gadhimai festival: ‘barbaric’, ‘cruel’, and ‘inhuman’. It’s described as the world’s ‘biggest’ and ‘scariest’ animal sacrifice. The inside of an industrial scale abattoir in Europe is probably just as scary, and the only difference between Gadhimai and Thanksgiving (which both fall on 27 November this year) is that in America tens of millions of turkeys are slaughtered.

In this battle between local organisers and powerful animal rights activists backed by international celebrity supporters, the issue of its cultural importance to people in India and Nepal is lost. In 2009, French actress Brigitte Bardot lent support to the campaign against the festival. This time she has been joined by Joanna Lumley, the British actress known in Nepal for supporting the equal rights movement of British-Gurkha soldiers.

The media loves the images, and there are few more dramatic than a man surrounded by hundreds of decapitated buffalos. The pictures are amplified by the intensity and relentlessness of social media and goes viral. Animal rights activists worry that the sacrifices have an adverse impact on the psyche of Nepali children who watch the killings. But what about the images that they themselves circulate over the Internet? For arm-chair Western activists and local collaborators, the sacrifices represent their own festival of righteous indignation. It’s telling how the websites of these groups, while issuing red alerts on the festival and running a countdown as if it was doomsday, also urge supporters to donate generously.

While the drumbeat against animal sacrifice in ‘Hindu’ Nepal peaks, animal slaughter goes on uninterrupted in meat-eating Britain. Some of these activists should picket beef and chicken suppliers for KFC, McDonalds and Burger King, or launch a campaign against the massacre of turkeys next week.

Except Buddhism, Hinduism, Christianity and Islam all have elements of animal sacrifice. Moreover, there are numerous belief systems, cults and sects within Hinduism and animism where some form of animal sacrifice is required. The issue here should be a gradual reform of this tradition, not an immediate and outright ban. The majority who live in the Gadhimai region are subsistence farmers for whom eating meat is an annual luxury. The animal sacrifice is deeply rooted in their belief system.

Perhaps they are appeasing supernatural powers to rescue themselves from their hardscrabble lives. They may be poor, but they have aspirations. It is easy to condemn something as wrong, but it takes huge efforts to understand it and change the mind-set.

There are a host of issues associated with the festival: the management of the waste, the commercialisation, the growing market for livestock trade which are rarely discussed in these anti-sacrifice platforms. As Chandrakishore writes in Kantipur (see page 18) the festival is an opportunity for locals to reconnect with relatives across the border. The priest of Gadhimai temple is a Tharu, Chandrakishore points out, and most devotees are Hajams, Lohars, Malis, Telis, Kumhars, who are at the bottom of hierarchical and caste-segregated Madhesi society.

But such nuances are lost in the outrage over the sacrifices. For elite international activists, the problem seems to be that the animals are decapitated en masse in full public view. So, it’s OK to decapitate them en masse inside a slaughterhouse?

As some tweeters have pointed out, only a vegetarian has the moral high ground to condemn the killings of any animal for religion, sport or food.

Deepak Adhikari is a freelance journalist based in Kathmandu.