The Kathmandu Valley’s smog owes much to the highly polluting brick kilns that dot its southern expanses. What’s worse, the smoke billowing out of these towers obscures the terrible conditions in which its workers – including many children and donkeys – slave for minimal reward. These are the victims of the capital’s housing boom. 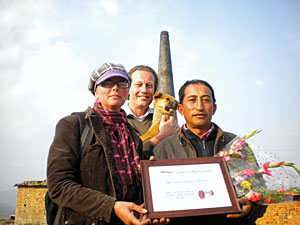 It’s time we moved away from ‘blood bricks’. This may be possible now, as Animal Nepal’s award to Indra Tuladhar of Bungamati Itha Udyog last week indicated. Tuladhar was honoured for producing ‘clean and green’ bricks using Chinese technology, and the animal welfare organisation hopes other brick producers will follow suit to reduce pollution and stop the exploitation of kids and animals.

“The industry has the technology and the resources to stop the production of ‘blood bricks’; all it needs is the right motivation,” says Krishna Singh, program manager at Animal Nepal. “We can address the issues by introducing new technologies such as Vertical Shaft Brick Kilns and automated machinery.”

The brick factory, located in Bungamati, introduced Chinese automated brick-making machinery in 2009. The factory now produces bricks year round, and does not employ migrant workers, children or donkeys. Workers are contracted and earn fixed salaries. The improved technology means that significantly less emissions are produced, making for less hazardous work conditions. The bricks themselves are transported by electric carts, negating the need for donkeys. Bungamati Itha Udyog is one of three factories in Nepal using this technology.

Tuladhar was well aware of the labour problems, animal abuse, and pollution the brick industry was responsible for. So when he learnt about the new technology, he took the opportunity to clean up his own factory. To encourage both suppliers and buyers to tap into ‘green bricks’, a network of NGOs active in environmental protection, children’s rights and animal welfare, including Animal Nepal, have come together to promote a responsible brick-making industry. A certification system will be introduced that will provide brick factories with a red, orange or green label.

Animal Nepal’s award to Tuladhar was supported by Dutch Party for the Animals member Martin Schoenmakers. Together with Animal Nepal Volunteer Director Lucia de Vries, Schoenmakers presented Tuladhar with a certificate and gifts. The clean bricks producer now plans to build better housing for his workers and introduce a firing system that will result in almost zero emissions.