A network of social workers, environmentalists, child rights and animal rights advocates who form the BrickClean Network (BCN) have termed traditional bricks ‘Blood Bricks’. They say the industry is one of Nepal’s ‘dirtiest little secrets’ and are lobbying responsible citizens to opt for clean and green bricks. 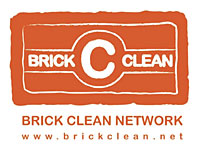 The kilns exploit the most desperate people, thousands of children mould bricks or work as donkey handlers. “Each time I visit a brick factory I am outraged,” says Pramada Shah, activist with Animal Nepal. “The mules and donkeys are almost always overloaded, underfed, and made to work even when they are sick or pregnant.”

BCN is trying to promote socially responsible brick-making and has introduced a certification system in which brick factories are labeled as red (worst), orange (improving) or green (excellent). The network uses 18 criteria related to environment, child labour, workers’ conditions, and health and sanitation to rank factories. This year’s certification shows that Nepal does not have a single ‘green’ brick maker. However, three factories, Shree Satyanarayan, Shree Brahmayani and Bungamati Itha Udyog, receive the orange label. Factories outside the Valley will also be certified. 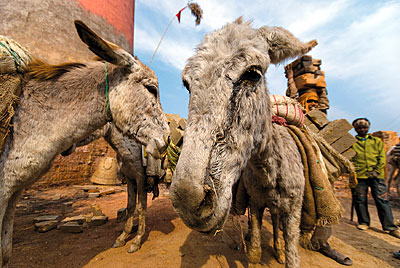 “Middlemen or naikes prey on the most desperate: flood victims from Sarlahi, Tharus from Dang, Dalits from Kavre and Makawanpur, landless from Rukum and Rolpa,” says Helen Sherpa of World Education, “any disaster can push a family into a cycle of declining poverty, marked by six months of work in a brick factory.”

Child workers include those with disabilities. The workers’ health tends to deteriorate in the factory’s polluted working environment, in which people live in makeshift huts, with poor sanitation. Brick factories move to places with lower rent and cheaper labour, leaving behind a trail of devastation. A recent government study shows that the industry annually scoops up 1 million cubic meters of fertile soil in the valley alone to bake into bricks. 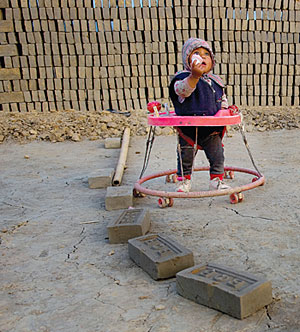 Of the estimated 750 brick factories in the country, only 450 are registered with the government. Recently factory owners protested against having to pay VAT, arguing that the industry does not import raw materials and provides much needed jobs to countless people.

“We are speaking of a very profitable industry which runs on coal from India and is not exactly the best employer. Why should this industry be treated differently?” asks Usha Manandhar of BCN.

Manandhar says the BCN certification has the potential to end to this type of modern-day slavery and clean up the environment.

Bricks are often produced by bonded labourers, including children. Over 1,000 mules and donkeys haul bricks and are made to work till they drop.