When Pabitra Tamang’s parents found out she was suffering from a life-threatening disease called a-plastic anaemia, they took a desperate decision: they left their jobs as daily labourers to take care of five-year-old Pabitra and her two sisters. 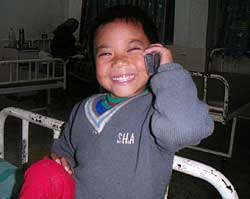 With no money to pay the rent, the landlord threatened to throw them out of their tiny Bhaktapur room. All three children left school and moved into the hospital, much to the chagrin of the medical staff. Only Pabitra kept smiling: she loved the extra attention and her chance to visit the hospital’s playroom.

While Pabitra received regular blood transfusions and medication, the hospital bills increased. The small plot of land back in Makwanpur district was put up for sale but the Maoists stopped them from selling it. A loan was taken and the parents started visiting churches to ask for contributions. The doctors said even with the best care Pabitra would not survive long unless she was taken to India for bone marrow transplant or immunosuppressive treatment. Average costs for which was Rs 700,000. The parents were bewildered. At the rate things were going they could no longer feed their children, let alone travel to India.

Due to the armed conflict, the number of destitute children suffering from serious diseases is increasing everyday. Especially in the hills, village health facilities have been seriously affected as general health conditions deteriorate. In 20 VDCs in Mugu for instance, there is no health care to be found. Mobility has been hampered as a result of which, an increasing number of sick children arrive in the capital with chronic medical conditions. Treatment tends to be difficult and costly. With no proper government support system in place, a growing number of parents are left with only one option: take their sick child home to die. In some ways, destitute Nepali families facing severe health problems are worse off than tsunami survivors in other parts of Asia.

Some hospitals run some sort of a welfare scheme. Social Action Volunteers, started by Father Eugene Watrin 20 years ago, conducts programs in villages in Kathmandu Valley as well as in Kanti Children’s Hospital. Food, clothes and lodging are provided if needed, as well as blood and some financial support. Thanks to the large number of student volunteers in the program, each year over 200 sick children are supported in one way or the other.

Jayanti Foundation, established by Princess Helen Shah in the memory of her daughter Jayanti, donates the income of Pokhara’s Fishtail Lodge to support heart patients. Each year some 120 patients undergo sponsored heart surgery, 60 percent of them are children. The organisation is supported by Nepal Youth Opportunity Foundation and a number of hospitals, which provide 30 percent of treatment costs. Unfortunately, due to reduced incomes and Maoist threats to close down Fishtail Lodge, support is gradually dwindling.

Ganjala Outreach was established last year in the memory of eight-year-old Raju Basnet, who died from untreated a-plastic anaemia in September 2004. A group of concerned individuals got together to create a pool of blood donors and establish a support system for children such as Raju. Ganjala’s founder Netup Lama dreams of establishing a nation-wide fund for ill and destitute children.

“The suffering of these children in the hospitals of Kathmandu is shocking. No child should ever be sent home without treatment, simply because of lack of money or information,” says Netup Lama, who feels such a fund should be initiated and managed by a committed network of welfare and business organisations. Pabitra was lucky. Ganjala Outreach requested the All India Institute of Medicine to provide heavily subsided treatment and helped raise funds. Pabitra has been in Delhi for the past month and responds very well to the treatment. From her hospital bed she says she feels well and looks forward to being reunited with her sisters this week.