Donkey in the back

Night was falling when I drove Animal Nepal’s rickety ambulance towards the Donkey Sanctuary. A man on a motorbike passed the car and looked inside. His face froze; he decreased his speed. Soon he drove along the ambulance, glancing inside. 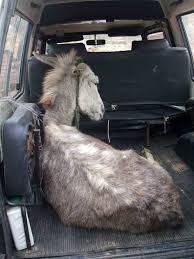 The man was not eve teasing. He was looking at the patient in the back of the car, an adult white donkey, positioned rather uncomfortable in the tiny car. The donkey’s head partly stuck outside the window, her nostrils flaring. Once in a while she tried to reach me with her nose, as if to say, ‘please take me out of here.’

That morning Animal Nepal’s three vets, Sudeep, Surendra and Parisha, and myself drove to a remote brick factory in the Kathmandu Valley. The ambulance had trouble getting there; we had to cross streams, and navigate around boulders and bricks, apparently fallen off trucks. The kiln was located in a beautiful spot, on the shores of the Bagmati river, amidst fields covered in flowering bright yellow mustard, dotted with traditional mud houses. A scene from a tourist postcard.

However, when we parked the car inside the factory a very different picture emerged. Children dressed in rags, carrying younger siblings on their back, surrounded the ambulance. Their faces were covered in dust; some of the toddlers’ heads were shaven to prevent lice. There were no adults around; while the parents worked the children had to take of themselves and each other. None of the children had any toys. A boy wearing a dirty Nepali topi[1] pulled a wooden brick mold behind him through the dust.

We had to walk up a hill to find what we came for. The open air factory employs some fifty donkeys, mules and horses to carry unfired mud bricks from a hilltop down to the kiln where they are baked. Today we brought a first aid box and planned to teach the donkey owners (four in total) how to use the medicines.

The owners in this particular factory are cooperative, and often call us when a donkey is sick. Still, we were shocked by the conditions of the animals. They were overloaded and continuously beaten by wiry handlers, boys from poor families, as young as eleven. 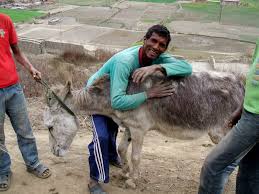 The vets immediately started treating the animals. Apart from saddle wounds the donkeys and mules suffered from hoof problems and eye infections. A severely malnourished mule stood alone, too weak to move. “Minimum one week rest and mineral supplements twice a day,” advised Sudeep, after providing the poor creature with a medicine to promote digestion. A  mule suffering from laminitis, a very painful condition caused by inflammation of the hoof, was given two weeks rest.

“Please have a look at one of my new donkeys,” one owner requested, “she is blind and her back legs don’t work properly.” We walked over to the night shelter and found a pathetic looking donkey, lying on the path. The creature was dehydrated and malnourished, and seemed unable to walk. The vets became agitated. “Why did you not call us earlier? We won’t allow you to keep this donkey here in these conditions,” they told the owner. 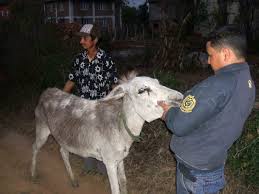 A long debate started, in which the owners explained that someone took the donkey here from another kiln, and that, yes, he was agree to send the animal to our sanctuary. What’s more, he and his friend would personally carry her to the car.

That was how Shree Devi, as the donkey was named, ended up in the back of our ambulance.

Shree Devi at first was apprehensive. After the long, bumpy ride to Godavari, we had to literally pull her to her retirement home, supporting her back legs.

After her arrival the twelve other resident donkeys left the night shelter to sniff at Shree Devi. She easily passed the test. Shree Devi then enjoyed the first of many nourishing meals in her new home.

Animal Nepal’s Working Equine Outreach Programme supports some 1500 equines working in Kathmandu brick factories. Surveys show that thanks to various interventions the conditions of equines have greatly improved. Nowadays the loads are smaller, beating has decreased, and the general health conditions of the animals are far better than before.

To some extent this is true – inputs such as regular workshops for owners and child handlers, regular de-worming and vaccinations, first aid boxes, improved harnesses, hoof cleaners, health camps and educational workshops have had a visible impact. Recently four new staff have been recruited to intensify our support services. The new team is awesome; they work from dusk till dawn to improve the lives of Kathmandu’s ‘beasts of burden’.

However, occasionally we still come across abused and injured donkeys such as Shree Devi. We pray that next time when we visit a brick factory we will be able to leave empty handed…