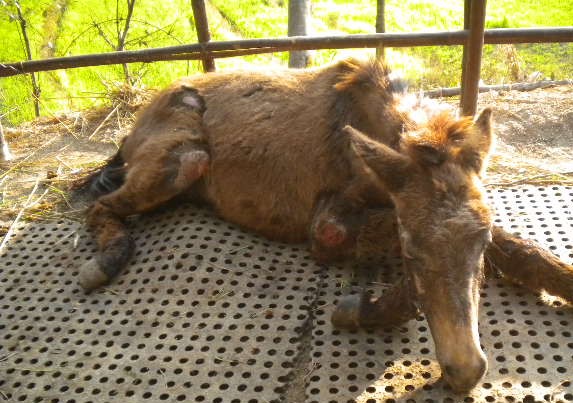 Lulu, a malnourished working donkey, died last week night at our shelter. She died from colic, a disease that is mostly caused by eating plastic, often fatal in equines. Today, on World Animal Day, I wonder what Lulu’s life must have looked like. What is it like being a common Nepali donkey, employed in one of the country’s countless brick kilns?

The first thing Lulu must have experienced on this earth is dust. Dust marks the lives of working equines in Asia, home of half of the world’s 50 million working donkeys. Nepal’s working equines (horses, donkeys and mules) have never been counted, but 100.000 is a fair guess.

If Lulu was born in Nepalgunj, the largest equine bazaar of the country, Lulu was probably delivered on the street. Donkey owners do not own land and simply abandon donkeys, pregnant and all, until work has been found. Lulu’s mum might have been a scavenger, nudging her foal to the next garbage heap, in search of some food.

Break the cycle of bonded labour. And end the abuse of the hardworking, gentle and intelligent working animals of Nepal.

Or Lulu might have been born at a dusty building site, where her mother was provided one or two days rest from howling mud, cement or bricks. Lulu probably witnessed her mother being forced to abandon her, beaten with a stick if she tried to return to her newborn. Lulu would have learned to fear humans from the moment she opened her eyes. Even when they are wiry eight year olds, donkey handlers know how to beat an animal into submission. As soon as she could control her shaky long legs Lulu would have followed her mother, being pushed forward along gravel paths, almost disappearing under loads of bricks. She would have tried to find her mother’s milk, but probably be pushed away by an impatient handler. 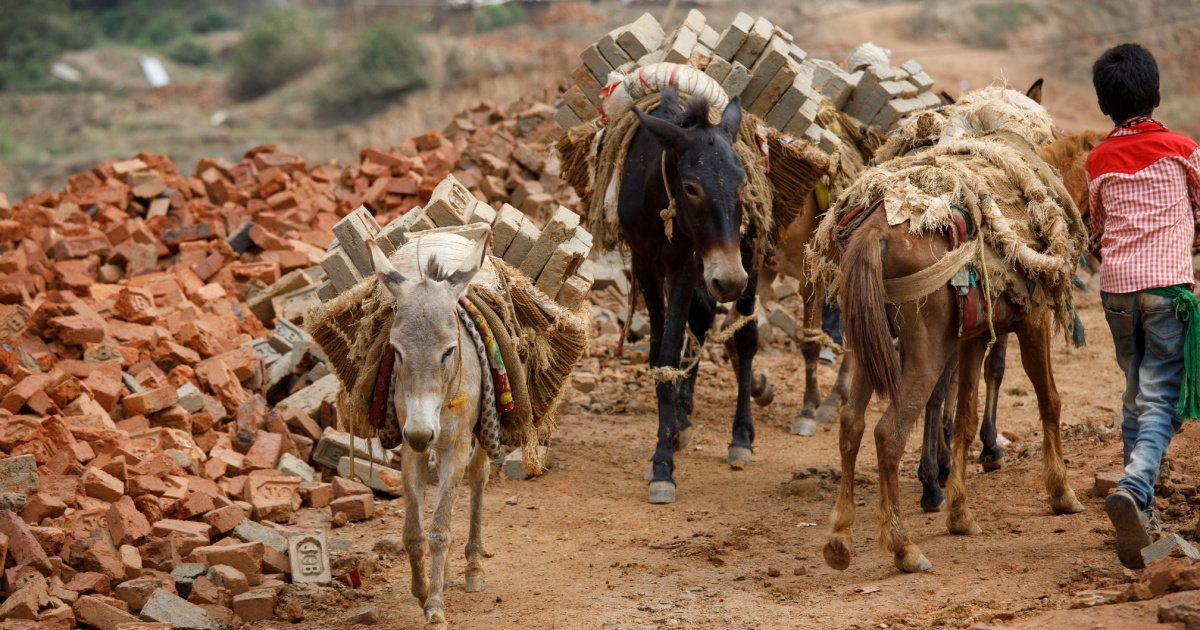 When reaching the age of two, Lulu would have become a working donkey herself. If she was lucky Lulu would be sold to a Himalayan trader, to carry goods up and down narrow mountain trails. The work would be hard, but at least the owner would be concerned about her well being. He would allow his donkey to stop occasionally to drink water from mountain streams, and provide it with herbal medicines when it got sick. During monsoon Lulu would be provided with a shelter, and food, and be allowed to take a break.

If Lulu was unlucky she would be sold to a tonga or cart owner, and be forced to carry endless streams of people and loads, rain or shine. Her harness would be ill fitted or in bad condition and Lulu would end up working constantly with open sores. 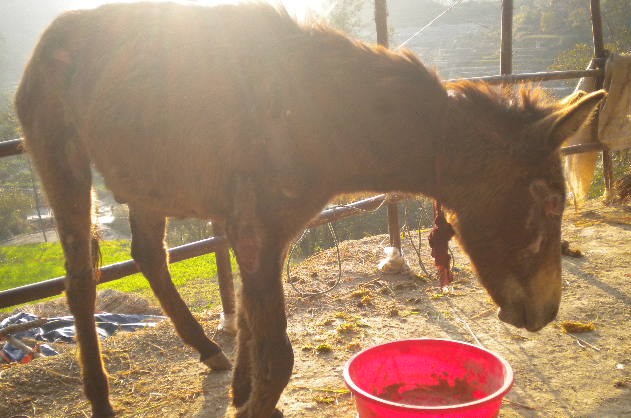 Working animals like Lulu grow up in a country with no provisions for their welfare. If an owner starves his animals, or a handlers beat them to death, they go unpunished. The public hardly registers the presence of thousands of donkeys and mules like Lulu. A mule train might pass you by on a mountain trail, but you would hardly notice the animals underneath the bulky loads. You might have actually been carried by Lulu on a tonga somewhere in the Tarai but oversaw the sweat on her body, the open sores, the exposed ribs.

For donkeys and mules there is an even worse fate than being a mountain porter or tonga puller: the one that Lulu met. In December last year Lulu was loaded into a common truck in Nepalgunj, with no space to lie down, and was moved to the other side of the country. There were no breaks, no proper water or food, and no medical care. Some of the fellow donkeys did not survive the journey. The dead and injured were thrown into a crevasse, or left to die by the side of the road.

Lulu survived the journey and worked in a Kathmandu brick kiln for six months until May this year. It was her last season in hell.

You have to visit a brick kiln in the hot season to know what it is like. You will arrive on a dusty, gravel road, as brick kilns are usually located in remote places, away from the preying eyes of social workers and journalists. You will see a make shift village with shelters made from corrugated sheets buried in the earth, or from unfired bricks. Hundreds of people, mostly children, crawl like ants through the heat and dust. They mix mud with some cement to mold unfired bricks. After drying in the sun the bricks are transported to the kiln. This giant outdoor furnace employs countless young boys and young men from Bihar, India, who make sure the bricks are fired at the right time and temperature. The fired bricks are transported to the road head, where they are picked up by distributors who deliver them at your doorstep.

If you can take your eyes away from the struggling humans, you will notice mules and donkeys staggering under giant piles of bricks. A donkey like Lulu will have “saddle sores,” open wounds on places where the harness makes contact with the body. She might have infected eyes from dust and pollution particles or may even already be blind; blindness is not enough reason to be given a break from work. She might also have a broken leg or hip, an abscess, a tumor, overgrown hoofs, or any kind of infection. Such medical conditions too are considered unimportant. She may be in the last stage of pregnancy, or have given birth a few days ago. She may in fact be dying — countless donkeys have literally dropped dead while carrying bricks. And even when she is relatively fit the brick donkey will be underfed and dehydrated from working long days in a place where nutritious food and clean drinking water are nowhere to be found.

The bricks that are used to build our comfortable, earthquake proof houses and offices are in fact blood bricks, produced by bonded labourers, working children and abused mules and donkeys. 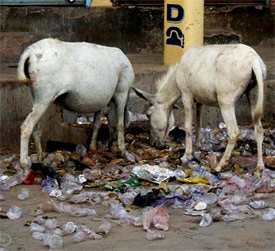 When Lulu was dying we discovered that her gums had rotten away. They had become infected after she tried to eat bamboo or tree bark to still her hunger. You see, Lulu, after surviving six grueling months in the brick kiln, was abandoned by her owner on a small farm in Khopasi. Together with 55 other donkeys she was left in the care of a poor family, who hardly had enough to feed themselves. The donkeys huddled together under a plastic sheet where due to malnutrition, cold and rain, their immunity decreased even further. They were bitten by leeches and mosquitoes which had an adverse effect on the existing wounds and infections. Soon the donkeys started dying.

By the time we rescued Lulu and eight other donkeys she had witnessed the death of 46 donkeys and ten newborn foals.

Lulu survived a week at our shelter. Her wounds and hoofs were cleaned and treated, and she received nutritious food with plenty of water. Lulu was brushed once a day and slowly warmed up to her caretakers. But help came too late. A life of abuse and neglect cannot be undone easily.

You probably belong to the majority of people who believe human welfare is more important than animal welfare. You might feel bad for Lulu but shrug your shoulders and think: “Bad luck but as long as children die from diarrhea we cannot waste our energy on animals.”

But animal welfare is human welfare. Most of the world’s poor, some 70%, depend on animals for food and economic security. That is why the Animal Welfare Network Nepal, for a general awareness campaign that is being launched today, chose the slogan “Ragat euta ho, dukha pani” (our blood is the same, so is our suffering).

Next time when you see a stack of bricks, think of the nameless bonded labourers, children and donkeys who produced them. Or even better: take action to improve their lives. Promote “clean and green” bricks that are produced in a safe and humane manner. Sponsor a “brick child” to go to school. Lobby with the government for improved monitoring. Break the cycle of bonded labour. And end the abuse of the hardworking, gentle and intelligent working animals of Nepal.

(The writer is Director at Animal Nepal)