Pramada Shah and Lucia de Vries, volunteer directors, at Animal Nepal, expose the regular poisoning campaigns by local governments in Republica. “Betraying our canine companions by feeding them poisoned meat is an example of unmatched cruelty,” they write.

Earlier this month our friend Urmila woke up when her dog started running around and twitching uncontrollably. He soon developed epileptic attacks and started vomiting. Urmila realised her beloved pet had been poisoned, ran out into the street to find a taxi and called the vet.

Thanks to Urmila’s quick response, the pet could be saved. However, many pets are not so luck and an agonising death due to strychnine poisoning distributed by local governments. This month alone around one hundred community dogs are reportedly poisoned by Bhaktapur Municipality. The images of dying dogs in the streets of this ancient city, howling and shaking with convulsions, are deeply traumatizing. How a tourism destination can pride itself on killing community dogs in such a senseless manner is something that probably only the city authorities can explain. 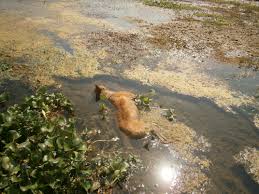 Nepal will not receive credit for continuing to utilise outdated measures for addressing stray dog problems.

The mass poisoning takes place despite the fact that organisations such as Animal Nepal, Bhaktapur Animal Welfare Society (BAWS) and Kathmandu Animal Treatment Centre (KAT) have introduced humane and effective programmes to create a reduced, healthy and friendly dog population inside the Valley.

Using strychnine poison has been the preferred method of killing dogs by municipalities since decades. As soon as community members complain about aggressive dogs or suspected rabies cases, most municipality staff react by taking out their supplies of strychnine poison, hide it inside chuncks of meat and scatter it around the area. The effects are often devastating. Apart from killing community dogs, many other stray animals and pets become a victim too. Half a year later the dog population has recovered, community members start complaining, and the process starts all over again.

Poisoning, apart from being cruel, is ineffective. That is why we are astounded that municipalities across the country continue to choose poisoning as the main solution to stray dog problems. This takes place in spite of clear evidence that the strategy is harmful, baseless and counter-productive.

First of all, Poisoning is not effective or scientific. The World Health Organisation has long protested that the poisoning of animals is not a scientific and effective. Independent research has also persistently shown that the number of dogs does not reduce after poisoning. Due to laws of nature, within as little time as six months the population recovers and often even increases. Poisoning also does nothing to decrease aggression among dogs and against humans.

This is why the World Health Organisation and international welfare organisations promote humane dog management. In Nepal, approved scientific and humane dog population management has been introduced over a decade ago – and some far-sighted local governments are supporting it.  Animal Birth Control/Anti Rabies (ABC/AR) is the only scientific and humane answer to overpopulation, rabies and general dog menace.

ABC/AR involves the surgical sterilisation (spaying) and rabies vaccination of dogs, with an emphasis on females in order to gain the most efficient outcomes. Aside from the adoption of ABC programmes, the vaccination of pet dogs should be made mandatory. Suspected rabies cases should be caught and kept under observation.

The Government of India adopted a policy to implement spay and neuter programmes to control the population of street dogs. And so convinced are they of ABC effectiveness, that 50% of surgery costs are supported by the Indian government, while municipalities support other expenses.

In Nepal, municipalities need to be encouraged and supported to develop such programmes. Spaying and vaccination can be conducted with the support of qualified local NGOs. The member organisations of the Animal Welfare Network Nepal (AWNN) have international standards of practice and expertise in this area and are more than ready to help.

The public at large also needs to be educated on humane dog management and pet care, which would help local government to implement these programmes and gain significant kudos with their constituents. And then, when authorities at the national level can see the benefits at all levels and get behind this strategy, effective and humane dog management will become a reality in Nepal.

Poisoning is not only ineffective, it is also inhumane. The image our community leaders want in their communities is not one of ‘man’s best friend’ dying slow, violent and agonizing deaths. But these heart wrenching and deeply traumatizing scenes are what children and other members of the public experience in the streets they live. Poisoning is cruel and inhumane. It results in a horrific death, throwing the dogs into violent seizures for up to 8-10 hours before they die in agony.

Apart from being ineffective and inhumane, poisoning is dangerous. Poisoned meat can be eaten by stray cows and even street children. During monsoon, strychnine is washed by rain into water sources, which causes casualties through the contamination of drinking water, vegetables, etc. Bodies of dead dogs are generally not deposed off in an appropriate manner, leading to further contamination.

Nepal is more than ready for a long term-solution to stray dog problems. The knowledge and expertise is there, the technology is there, the support can be arranged. What – or who – is holding us back?

Nepal will not receive credit for continuing to utilise outdated measures for addressing stray dog problems. The indisputable evidence for a relationship between animal welfare and public health has never been greater or more respected by international bodies fighting the new frontline of zoonotic disease that threatens us on a daily basis.

There is no longer any excuse whatsoever for using irrational, out-dated tactics which put us all at risk. We urge the public and authorities to support a ban on dog poisoning, and instead promote long term, effective and humane solutions for control of canines across the country.

Dogs are known as man’s best friend. If we treat them well, dogs become our companion and protector for as long as they live. They don’t ask much in return. Betraying our canine companions by feeding them poisoned meat is a cruelty which few are able to stomach.